During the course of many years in education, I have had the opportunity to take the lead in integrating technology in the classroom and in guiding others along this path.  Here are some examples:

My Second Chance Bonds Quiz through Google Forms, which came about because they bombed my first quiz.

Many forms for many different purposes:

*The experience will be virtual, but my fellow 7th grade science teacher and I have been approached to have our classes pilot an e-learning module developed by WestEd which has students go on a virtual scientific expedition to the Galapagos Islands.  They are to travel from island to island, taking pictures of iguanas from around the islands, looking for different variations, and measuring them in the virtual lab.  I have another training with them in January to find out what else my students will do with the data that they collect and how it ties to evolution, but this is going to be cool!

This site is one of the coolest on the web for science teachers, and is basically the first webquest-ish assignment that I ever had my students way back in the year 2001, the year I got banned from Napster.

( I downloaded one – ONE – Metallica song!) My Webelements assignment is ripe for a revamp, and getting asked to train other staff in integrating technology into the classroom is the perfect opportunity. I need to ditch the worksheet in favor of  a digital set of questions and links to presentation webApps, and encourage them to bulid presentations of their elements, maybe even have a group presentation, with the groups naturally sorting themselves into Halogens, Noble Gases, Alkali Metals, and the like.  Each group will present their similarities, and then each student will tell what’s unique about their element.  I can see it now…on a Prezi.

I recently had contact with my principal and began a conversation about being a presenter for our staff training coming up in February.  I want to be more involved in the tech decisions and integration at my school. Seeing that ITEC 815 was a great training ground for integrating technology into the classroom, I suggested that I train other teachers how to make a webquest in little time, or at least 45 min.  I would have a computer lab available to me to train others, so now I’m trying to think of what free website hosts are out there, or maybe how to use our Schoolloop website to make a webquest.  I can look at google sites or direct them to wordpess, blogger or myecoach.  I know my-ecaoch is a paid site, but it is a nominal fee.  Even so, I think that teachers would want a free site if possible.  another consideration is whether the site would get through the district filters, which could be a problem with wordpress and blogger, in particular. 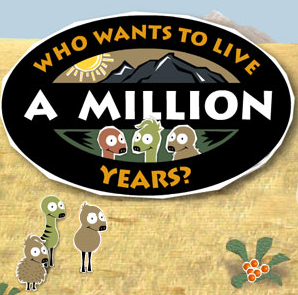 This is the title of a song that I wrote to help my students understand and get excited about Evolution.  I plan on using the skills that I have learned in the ITEC program to turn it into a video over the winter break and use it in class (via a YouTube post) when my students and I get back in January.  This unit is going to become more and more tech heavy for me in the future.  I say this because evolution is not the kind of science topic that lends itself to hands-on real world lab activities.  It is much easier to conceptualize in a simulation, which of course is what computers are great at!  This last week, I had my students visit Discovery Science Channel’s Charles Darwin Game.  This game is addicting, the gameplay has many different variables that you can control, and many that are out of control, as  a game about natural selection should.  My students thoroughly enjoyed the game, were sad if the creatures they selected went extinct, and cheered when they survived a million years of evolution.  I had them in groups of three to four per computer which seemed to work well for this activity.  I have 12 laptops available in my classroom, and am using computers much more regularly this year because of this availability. I find that I am seeking out activities for my students on the web much more frequently as a result.  I created a worksheet to guide my students through the lesson that precedes the game and to help them focus on the science in the game itself, which I have attached here: 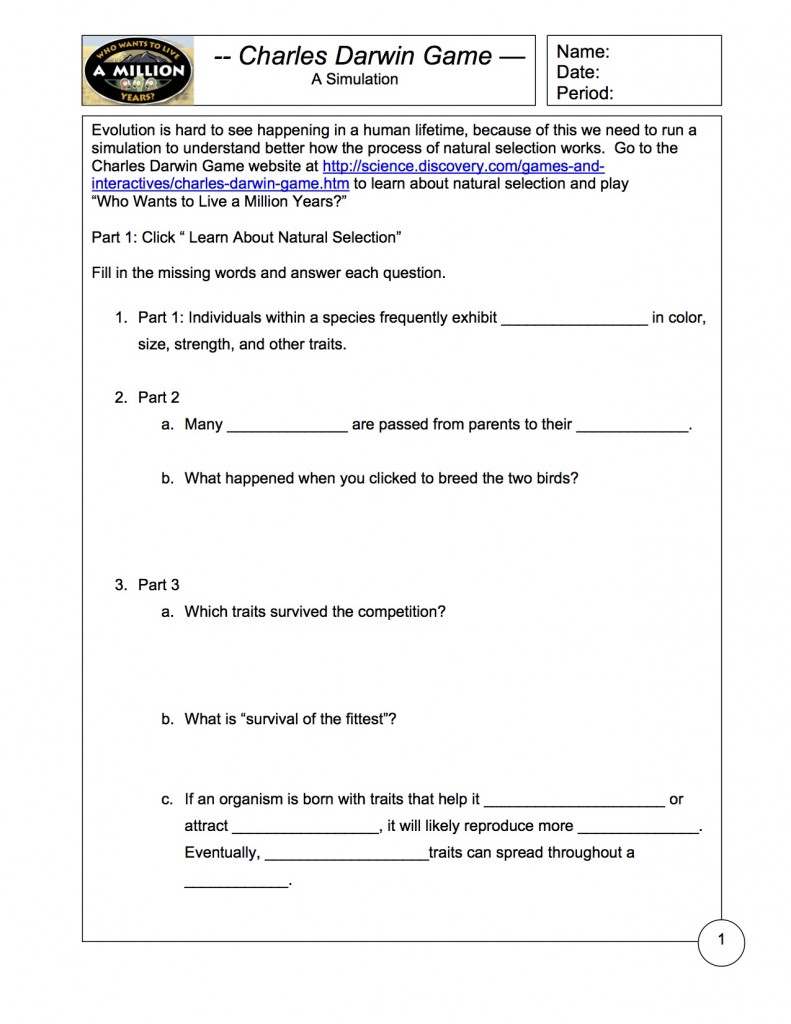 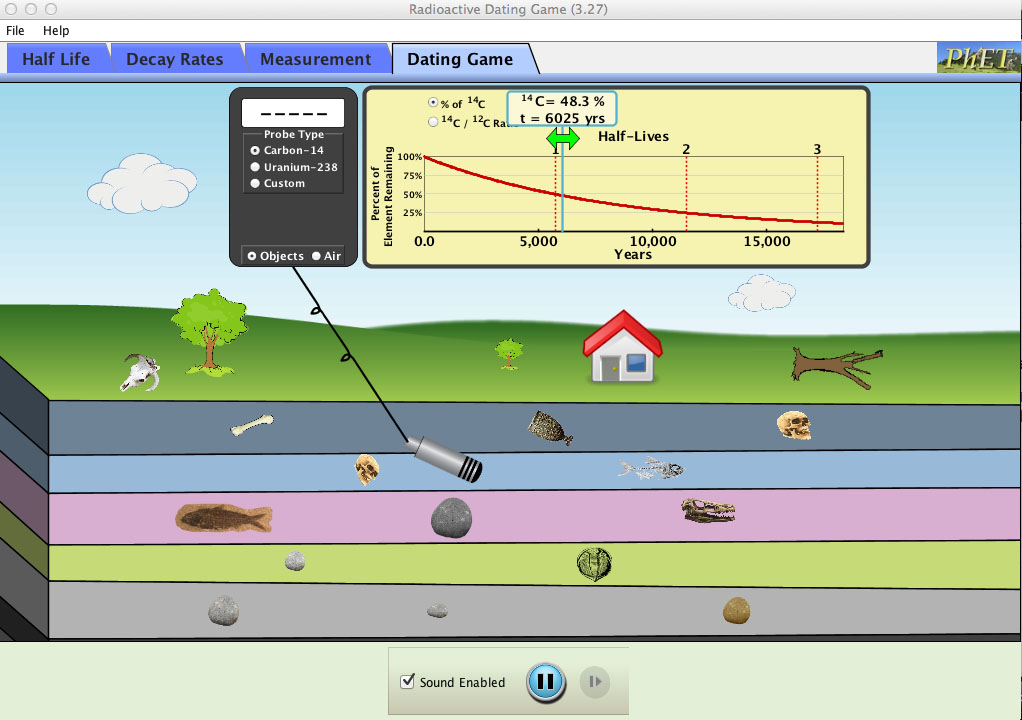 While guiding my students through the density playground, I started to explore the vast resources of the PHET website, and came across this interesting simulation on radioactive dating:

Unfortunately, this simulation uses Java, for which my poor out of date classroom computers needed to download an update.  The first class I tried this with was only partially successful in getting it to work on their computers, so I decided to use my teacher computer on the projector to run the simulation and ask students for their suggestions an predictions as we ran the simulations.  I found it not as useful as the Buoyancy Playground, but it is much better at visualizing radioactive decay that previous methods that I have used to help students understand the concept.

I wanted my students to understand density and buoyancy, and a fellow teacher clued me in to this website maintained by the University of Colorado that has a treasure trove of science simulations.  We developed an exploration worksheet and then we were up an running!  My students got to change the density, mass and volume of different blocks that they would drop into water.  The power of this simulation is how easily my students could manipulate different blocks to get feedback on what makes things float or sink almost instantaneously.  the density playground has many different ways to adjust variables and behaves as objects do in real life.  They could even change the density of the liquid that they drop their block in so they could see what would happen if you drop a block of ice in oil or rubbing alcohol.  Spoiler alert!  It sinks! 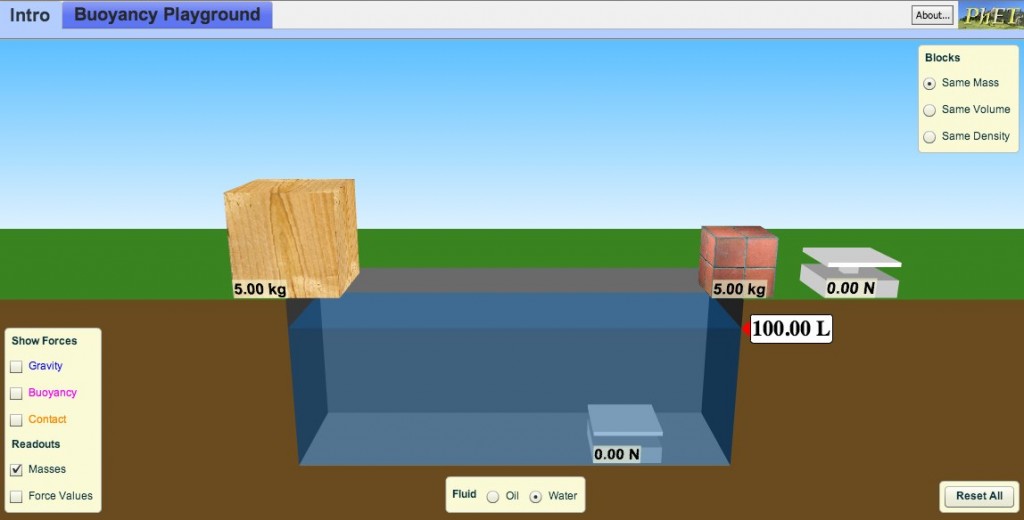 ” This has made a lot of people very angry and been widely regarded as a bad move.” – Douglas Adams

So goes one of my favorite lines from The Hitchhiker’s Guide to the Galaxy “trilogy”.

The titular object, “The Guide” as it is called in the book is an amazing device.  Years ago when I first got a Palm Tungsten PDA (which you can apparently still buy on Amazon!), I immediately drew comparisons to it and The Guide. Now that we are several generations into the iPad and other tablet computers, the comparisons are more and more apt.  As an educator, I see the great potential for integrating technology, students should have the ability to access the vast world of information at their fingertips.  But this access comes with a price: uncertainty.  Since the internet is awash with information from anyone that wants to post it, I as an educator need to train my students not just how to search for information, but how to find it.  In not just form, but in function, iPad and The Guide share similarities .  The iPad is a tool, made more powerful with the internet.  The Guide was envisioned by Douglas Adams thusly ”…though it cannot hope to be useful or informative on all matters, it does make the reassuring claim that where it is inaccurate, it is at least definitively inaccurate. In cases of major discrepancy it was always reality that’s got it wrong.” Through irony Douglas Adams muse that we are reassured by authoritative sources, and will cling to our beliefs in spite of evidence to the contrary.  Having a definitive resource leads to intellectual laziness, something that I see in the classroom when students first response to questions that they don’t know is to “google it.”  I cannot fault them, they live in an age of saturated information.  It becomes tiresome to root out the veracity of their resources.  But I still try to steer them to not completely trusting what they find on the internet.